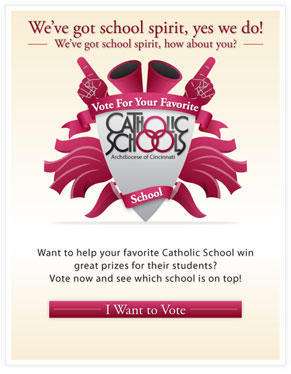 The title of this blog post is no joke. This is what we recently accomplished for the Catholic Schools Office of the Archdiocese of Cincinnati. It just goes to show what a little focused interactive marketing can accomplish. Here’s the story.

For a year and a half the Archdiocese had been working to promote Catholic schools in new ways. After much effort and a lot of money spent, the end result was some new billboards, a new website, about 130 friends on Facebook, and less than a hundred followers on Twitter. Something more had to be done. The approach wasn’t working.

After a few important planning meetings, US Digital Partners took over the interactive marketing efforts. Our underlying goal was to get out the good stories about Catholic education. The people who have those good stories are parents, so we focused our efforts on finding parents on Facebook. We came up with a series of Facebook promotional campaigns to attract “likes” and allow parents to share their stories about the value of a Catholic education. As it turns out, that’s exactly the opportunity that parents, grandparents, students, teachers, and school staff members were looking for. 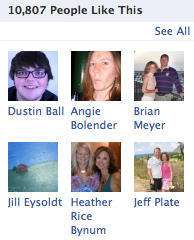 On December 14, 2010 we launched a Facebook promotion to give away three iPads to Catholic school fans. We went from zero fans to 2,500 in just two weeks. On January 3, 2011 we launched a parallel Facebook promotion. It was an app that allowed people to show their school spirit by continually voting for their favorite Catholic school. Anyone could “like” the page and vote every day. By the end of Catholic Schools Week on January 4th we had 10,807 “likes”, 45,000 votes cast, and nearly 500,000 Facebook post impressions in just 50-days. Best of all, thousands of supporters posted why they love Catholic schools. The testimonials are powerful and certainly what parents need to hear who are considering school options for their children.

This has been another great interactive marketing success that we will not soon forget. Many thanks to the Catholic Schools Office for working with USDP. Stay tuned because more great things will be happening in 2011.